When Hisa Sensei was still in good health there was a time when he focused on training us very exactingly in a certain katatedori (grab to one hand) aiki technique. When an opponent grabbed our wrist, we were to use only a small wrist movement to cause his attacking arm to straighten like a rod; then from that position, we channeled our power through the palm of his hand to his wrist, elbow and shoulder joints in succession, finally gaining control of his body as a whole. When this technique is ap­plied effectively, the opponent’s elbow is ex­tended so that his entire arm from wrist to shoulder becomes stiff like a rod, preventing him from moving it freely and causing him to float up on his toes.

Because this technique relies on extending the opponent’s elbow as one might extend and flatten, say, a folded piece of paper, we called it “hijinobashi” (elbow-extending), or because it is an aiki technique, “hijinobashi aiki”.

It may be said of Daito-ryu that the sim­pler a technique appears the more difficult it is likely to actually be, and hijinobashi aiki is no exception. At a glance it looks like nothing at all, but one only has to try it to realize how difficult it is to do well. While its outer form can be approximated, making it into an effec­tive technique without having mastered its underlying principle is quite difficult.

After trying and failing with hijinobashi aiki many times, I finally asked Hisa Sensei to show it to me again. As I held onto his wrist he showed me slowly and in fine detail how it was done, saying “Like this, and this, and this…” for each stage of the movement. Nonetheless, despite my best efforts to focus my attention on what he was doing, and no matter how hard 1 tried to imitate his movement, I simply could not do it. The best I could muster was to con­trol my opponent’s wrist in some a simplistic way that clearly was not how he had done it, and I found it virtually impossible to make my opponent’s elbow straighten.

I knew I had to be overlooking something, some small detail like the angle of my wrist or some specific way of turning it, but I could never figure out what it was. Not wanting to acknowledge my own lack of skill and devel­opment, I even started questioning whether the technique itself might simply have been one that had been stripped of any effective con­tent and somewhere along the line lost actual applicability.

Whenever I thought about hijinobashi aiki I could easily recall both what Hisa Sensei had said about it and the feeling of his wrist and the back of his hand as he applied it, which it all the more vexing that I couldn’t do it. After a while I just started to forget about it and I stopped trying to figure it out. Then it happened one day, some time after Hisa Sensei’s passing, that I had an opportunity to take up the problem once again, and after studying it from a variety of angles I finally discovered the needed principle that would allow me to do hijinobashi aiki successfully. Once I understood it all seemed so simple! I realized that the key had been right under my feet all the time.

Even better, I also realized that this new­found principle could be applied to a wide range of situations other than katatedori, so that no matter where my opponent attempted to grab me or my clothing I could use it to do an effec­tive technique without necessarily having to turn his palm up and reverse his wrist in the usual way typically done in jujutsu techniques. No matter what the specific starting position of my opponent’s wrist or hand, I was able to straighten his elbow in an instant by applying just a little force in a particular way, in the pro­cess sending a shock to his body that some­times even penetrated to his very center via his abdominal region. An opponent to whom this technique has been applied suddenly becomes unable to release his grip, finds the power drain­ing out of his attack as he is floated upwards, and becomes subject to control by the will of the person applying the technique.

The foundations of Daito-ryu are said to be built on the dual aspects of hand shifting (tesabaki) and body shifting (taisabaki), and hijinobashi aiki is a quintessential example of the former.

Just an Inch or So Up or Down

Daito-ryu contains a considerable number of techniques used to defend against grabs to the hand, wrist, or arm (tedori), and many of these defenses are considerably advanced in the sense that they require a high degree of mas­tery of certain subtle skills. Hijinobashi aiki is a prime example. Most tedori techniques begin with your opponent taking hold of your wrist or arm with the intent of controlling or manipu­lating it or hampering its freedom of movement. What is interesting about Daito-iyu is that tech­niques like hijinobashi aiki let you demonstrate to your opponent immediately that this feeling of superiority or control is an illusion, and that the act of grabbing itself in fact discloses a weak­ness or opening on his part.

Although this principle is also used in ex­ecuting techniques in the nikajo and sankajo series, such as shutozume and double- or single-handed shihonage, nowhere is it better exemplified than in the various tedori aiki tech­niques of which hijinobashi aiki is one of the best examples.

The effect of its successful application is that even from the instant your opponent begins to close his grip, he finds himself unable to let go as he unconsciously floats up on his toes or has his balance broken backward onto his heels; and then, without realizing exactly how or when, he is immobilized, pinned, or thrown.

Technically speaking, aiki techniques like hijinobashi aiki involve moving your wrist or the back of your hand inside your opponent’s grip according to a certain principle, but this movement tends to be so small that from the outside there seems to be hardly any move­ment at all. The movement is so subtle that it is no wonder that the opponent can hardly fig­ure out what is happening.

For the time being I will refrain from dis­cussing the specific principle of wrist move­ment that allows such techniques to work, but I would at least like to mention the direction in which you apply your force using the move­ment of your wrist or the back of your hand, namely toward a point just about an inch or so above or below your opponent’s shoulder. When your opponent comes to grab your wrist, his power is transferred along a straight line between his shoulder and his wrist. If you try to break his balance by pushing back directly in the opposite direction, you will simply run directly into the line of force of his grip, result­ing in a stalemate at best, or at worst a disad­vantage on your part since he can reinforce his power by bringing his weight to bear from above. In such a case it is as if both of you are simply pushing on opposite ends of a stick.

To avoid this, you must instead manipu­late your wrist in such a way that you channel your power toward a point about an inch (issun) above or below his shoulder. (The ex­act location of this point depends on the situ­ation and must be seen with your “mind’s eye.”) This causes your opponent’s shoulders to be drawn up, and in that condition it becomes amazingly easy to break his balance. Anyone who is interested should try having techniques like hijinobashi aiki applied to them and see for themselves.

As for the manipulation of the wrist itself, as I said, just an inch or so up or down (or left or right) is sufficient, and I recommend that people studying Daito-ryu strive to master this as well. 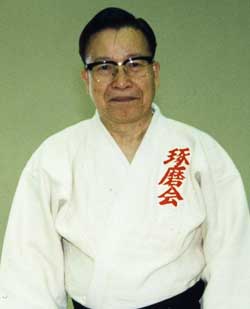